My life changes through various media.

I have, for various reasons, a lot of free time. I spend a lot of time reflecting and watching various things. As such, I've had my perspective changed rather radically many times over the years. Some major changes were major, some profound, some subtle. I have a good memory and can usually recall what changed my thinking.


Asimov's "The Relativity of Wrong" essay about the nature of science.
http://chem.tufts.edu/AnswersInScience/RelativityofWrong.htm

This essay really did change my perspective on science and allowed me to view science generally as an evolutionary algorithm gradually improving things over time. Not perfecting them, but making them better by increasing understanding. When the older theories are wrong it isn't that they overturned, but rather improved subtly.


Krauss' lecture on the Universe from Nothing.
http://www.youtube.com/watch?v=7ImvlS8PLIo

While, I've advocated zero-sum universe for a bit, mostly on philosophical grounds and lack of preclusion by science. Krauss makes a very compelling case that the science actually supports it. This is going to be the end of the first cause argument. QM says we don't need causes. And 2nd Law of Thermodynamics says we can't get something for nothing. So if we have something. It needs be net zero. So rather than 0=1, the universe is 0=1+(-1).


Aron-Ra's explanation of taxonomy, as well as his argument that humans are monkeys.
http://www.youtube.com/watch?v=s6TEDuDD3Zs


I swear I understood evolution prior to watching Aron-Ra's videos but it really doesn't feel like I did, how could I. I didn't properly understand cladistics. I can't even fathom how my brain worked without understanding basal relationships within monophyletic clades.

(Several More, Below the Fold)
(I just now figured out there's a button for the fold, not that I looked much).

In addition to Aron-Ra's explanation I was also turned on to timetree.org by ERV. I knew common ancestory, but I somehow get the impression that I didn't fully fathom it. That I couldn't really have used it as part of my very real thinking without such understandings. I recall a bit after a PNAS study about the diversification of placental mammals with regard to the K-T boundary, I added one of the diagrams to my desktop as wall paper. But I don't think I knew well the relationships but somehow hadn't fully fleshed it out. Perhaps Aron-Ra just impressed me so much that I thought he taught me everything I knew. In any event I didn't fathom clades before he came around. 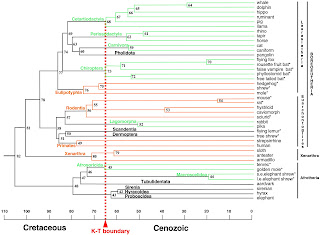 
Understanding history of science is one of the things I love most. To understand how the ancients thought, how they did science how they came to understand the world. Watching Cosmos those were the sections I loved the most. The understanding that there were scientists in the ancient world, and they did do real science. Sloppy Mythbusteresque science, but real science towards real progress and real understanding. Much of what was discovered in the early Enlightenment was actually just a rediscovery of science from about the first century.

Richard Carrier's explanation of metaphysical naturalism as a stronger position than blanket non-committal atheism. As given by answer to question #2 in an interview.
http://www.tabee3i.com/page/interviews/en/Richard-Carrier/index.html


I never fathomed how much better an argument could be from simply tearing down the other person's argument. That building back up and saying, "I don't know. But, it's not magic." Because, it has never been magic ever, in the history of the world. That science alone promises to give us understanding of things, because never once in the history of the world have we ever had magic turn out to be right, and for everything that was once a mystery it has always been science that explained it. So, just knowing tearing down the argument leaves both sides with an empty plate. But, building up the argument again, and showing that your side is the only side that stands a chance because your side is the only side that has ever succeeded is necessarily compelling.

Richard Carrier's observations about religious epistemology being the core of disagreement between the religious and skeptics, in the letters section of the 2007 May/June Issue of SI, to wit that creationism and the evolution debate and all the clashes that exist are just window dressings of this primary core issue.

"The problem is religious epistemology. As long as we have that we will always have fallacious and ridiculous beliefs like creationism, biblical literalism, false beliefs about atheism, and so on". - Richard Carrier, Skeptical Inquirer, Volume 31, Issue 4, Page 66, July/August 2007

I hadn't realized how important and central the idea of epistemology was prior to his letter in 2007. That it isn't evolution vs. creationism. It isn't atheism vs. religion. It isn't stem cell research vs. pro-lifers. It's epistemology. How do you know what you know and is that a good way of knowing things? And in the end the side of religion always boils down to faith.And as such we get people spouting random things they believe because they have no method of finding out what should be believed if you care whether your beliefs are true. It's the direct influence for my critically acclaimed poem (acclaimed by one commenter) "Epistemology":


When faith's a virtue and doubt's a vice.
No reason or proof could ever suffice.
No common ground for reasoned debate.
Ghosts and Gods are the immutable fate.
Points ignored and arguments ducked.
Theists are epistemologically fucked.

Richard Carrier's explanation of science and religion from a historical perspective. The explanations of science and evolution amongst ancient Greek and Roman scientists.
http://www.youtube.com/watch?v=PNMUz1iediU


Matt Dillihunty and his general arguing technique especially with regard to epistemology. "I care whether my beliefs are true or not. I want the most true beliefs and the fewest false ones."
Largely exemplified here: