Posted by Tatarize at 21:24 No comments:

So I ran across this article and basically it was horrible crap and I told em why. But, put a lot of work into it so I also posted it here.

Christianity existed prior to Constantine significantly so. It's the start of a terrible conspiracy theory to suggest otherwise. Much of the supposed external sources for a historical Jesus are from the second and third centuries and do no claim Jesus was real but expressly do establish that Christians actually existed. There was a push at the time to create one religion for one empire and Christianity did become the state religion afterwards. But there's every reason to suppose that any other religion could have done just as well and would likely have been more Roman than some middle-eastern blood cult.

You suggest that Christianity is a copycat religion, this is largely false and based on the work of Graves. Who was so sloppy as to be effectively worthless. Of the 16 mythical crucifixions most are outright fabrications or huge stretches to suppose that Osiris being cut into pieces is a "crufixition". Which isn't to say there weren't other blood magic crucified saviors, the Thracian God Zalmoxis is actually attested to in the BCE and was crucified and through his magical blood you can live forever in a spiritual realm. However, Graves never cited this. Rather he cited things like Chrishna who was not ever said to be crucified until there was a massive Christian influence in the region. And since these aren't properly attested and when, we have little to go on to suppose this. And saying that Mithra was crucified is downright absurd. Mithra's amazing feat was that he was born of a rock and slew a cosmic bull of some sort. There's little on their actual beliefs but what we know largely comes from a pictograph. In short, the only way anybody could say what you're saying is if they believed terrible scholarship and outright falsehoods. There's absolutely no historical records to indicate Mithra ever died much less died by crucifixion. With so many good arguments for the failures of Christianity or arguments you can draw out by pointing out the religion claims the universe is fundamentally hinged on the oxygen carrying cells of terrestrial animals as to propose that God needed blood to fix the universe, and only his own blood had enough magic to do it, so he gave himself a body and killed it. This is absurd as a genuine cosmology, but is exactly what superstitious people obsessed with blood magic would come up with if invented a religion, and lo and behold exactly such a people existed exactly where Christianity is first practiced.

Such arguments are terrible in a sea of great potential arguments to the point that it undercuts the entire case by even offering them (maybe somebody knows the most basic elements of the story of Horus or Mithra and can so easily scoff at them, that they will feel justified scoffing at all of them. If you give a bad argument along with good arguments, established cognitive biases are such that if they can see through the bad arguments they won't even address the good arguments.

While it is true that Eusebius argued for lying for Jesus and likely did. It is even the case that every copy of Josephus' work we have today that includes the Testimonium Flavium comes from a specific copy owned by Eusebius and that there's certainly a chance that he was the one who actually made that forgery. It is also the case that most all of the given external sources for a historical Jesus are significantly flawed. Most simply are late first and early second century documents which attest to the existence of Christians. And therein is a significant problem for your proposed thesis. Rather than evidence for it, you're saying that all of these documents can't even attest to the existence of Christians. Nor can there have been pretty much any of the early church fathers. Somehow all of the writings of Origen (AD 184/5–253/4), are actually fraudulent and don't really exist? Seriously? And that's just Origen, there's a dozen others Clement, Ignatius, Polycarp, Tertuillian, etc. Who defended the faith in the second and third centuries. They must all be fiction as well? Many of the Early church fathers argued for a Christianity much like the one that survived Nicaea.

Christianity existed long before Rome. The claims you are making is so absurd as to be downright shame worthy. With the bounties of proper claims why would anybody make the claims you're offering here? It's so bad and scattershot as to make the entire post worthless because you can't tell the mistakes from the points you got right, so much so that you'd be better off disregarding everything you said and doing all the research yourself. And that's not even considering the minor points like you suppose the library of Alexandria was burned to get rid of other gospels or evidence that Christianity didn't exist, or that the "The Serapeum housed the Great Library of Alexandria." Neither of which is true. They burnt the temple and the Serapeum burnt too. But, it wasn't the library of Alexandria, it was a separate annex across the town from the library that housed some of the books of the library. It was more to do with the civil unrest and general not caring about the books than it was an overt attempt at censorship. There were many other copies of the books the Library housed throughout Europe, they didn't get destroyed by fire or to suppress anything but rather they mostly rotted and nobody ever cared to rewrite them or save them during the dark ages.

Even the minor stuff you get horribly wrong. And you're using it to draw an absurd conclusion. It would be better to not read what you wrote, because it's filled with so many mistakes that it would likely make you wronger after you read the thing, than the small possibility that you rightfully correct somebody's mistaken impression.

Posted by Tatarize at 20:11 No comments:

Prior to the theory of evolution by natural selection, Intelligent Design was the theory supported by all the evidence. Scientists from Galen, Newton, Jefferson, Galileo, even Darwin when he was younger accepted this as the best explanation for how such amazing functional complexity could exist in the human body. The only alternative at the time being chance, and chance was a clear loser.

There wasn't a lack of any evidence, but rather a huge amount of evidence for the propositions. Which weren't as much magical thinking as we would think today as they were simply unknown. They weren't wrong for thinking this way. They honestly were very rational and went where the evidence lead them, and it lead them towards something that had many of the attributes one would ascribe to a God.

It actually was good evidence for God. Which is why when evolution came around and kicked that ideas' teeth in, all the foremost scientists in the world went from largely being deists and theists to being atheists. For this diversity of life to exist without God requires that there be a process like evolution that could create the diversity out of only randomness and time, and lo and behold there is *EXACTLY* such a process.

It isn't proof or certainty, but the fact of the matter is that evolution is good evidence that there is no God. It would be remarkably strange for God to create a universe whereby God need not exist, considering with God every universe would be possible. However, if there were no God, we would have to have a universe like this universe.

The chances that we'd have this universe are much higher if there is no God. And such claims that the only alternative to our current science is nothing at all is absurd. From preformation to Phlogiston and miasma, we've been wrong before, but we were lead there because that's actually what reasonable logical inference and evidence led us to conclude.

Ignoring such things and thinking the other side is a blank slate is actually kissing away an easy win. If you assert nothing, and they only assert bad arguments, when you've torn through their bad arguments you've finally managed to tie, because you never pointed out that what you're saying has always been the case and that the universe actually is particularly good evidence that they're wrong. And that what you're saying isn't an implicit assumption of science but rather the conclusion of science. It isn't that science must assume that the supernatural doesn't exist but rather than science works so damned well without it that that is considerable evidence that it doesn't. Science builds on the shoulders of other science, and the if one treats naturalism as a theory, you will find it has considerable evidence to support it, no evidence that contradicts it, and that it works effectively as a base theory for the rest of science. You need not exclude the supernatural a priori, you can do so a posterori. The supernatural doesn't work, it never has, and has always been wrong. It's not some special bias against supernatural claims but rather the fact that it's always been wrong that rightfully leads one to assume it would be wrong this time as well.
Posted by Tatarize at 00:30 No comments:

Seeing what we hear. The McGurk Effect.

Posted by Tatarize at 03:20 No comments:

I actually had somebody insist that their position was a coin flip because it was either true or not.

I am saying that the universe is natural phenomenon. That the only answer that has ever been right is generally the most likely answer for any new questions. You are saying that God needed blood to fix the universe and some bits of Semitic mythology are true even though they describe a radically alien universe. -- You don't get to slap a 50/50 on that bad boy. It's a horse race. My horse has never ever lost. Your horse has never ever won. My explanation has been the answer to everything we've ever figured out. Your answer has never been the answer to anything ever in the history of the universe!

Christianity in a nutshell. 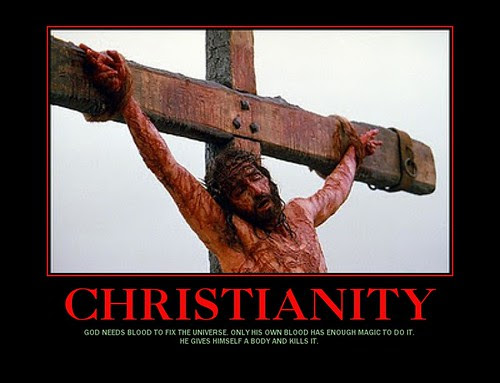 Posted by Tatarize at 19:18 No comments: