It turns out, not at all to my surprise, that a lot of them were women. Like basically all the big hitters were woman.

They were often depicted as hating immigrants and thus not wanting them to get the vote and being puppets of their husbands, but they were generally socially conscious. The founder of largest group there was also important with the implementation of the earliest kinds of day care (day nursery). And generally were maligned as backwards and overly clinging to Victorian ideas of gender roles. Women do the housework, child care, and social work. Men do the dirty works of politics. They weren't oddly enough, just prissy rich bitches hating on people. They, like basically everybody, thought they had a genuine point.

I quickly ran into National Association Opposed to Woman Suffrage (NAOWS) and some of their meetings as such: "Feminism and the woman's movement last night received such a drubbing as only a sister woman could give, when some 200 active members and friends of the New York State Association Opposed to Woman Suffrage gathered in the home of Mrs. Henry Seligman at 30 West Fifty-sixth Street to hear Mrs. John Martin, the Charlotte Perkins Gilman of the No-votes-for-women movement, tear to tatters the great new Cause."

30 West 56th is still there and is a five story mansion, though today it's between D&S Market and a Sushi place.

Apparently she was quite intelligent and quite wrong. She wrote the above book, which basically argued that we are not advancing because despite all our high technology and discovery it paled in comparison to the art and science of the ancient Greeks as measured by the number of notable figures in the past. Clearly she knew far more well-known geniuses in the past than she knew of in the future. And nobody can carve a picture on a gem worth a damn anymore. Clearly we aren't progressing! 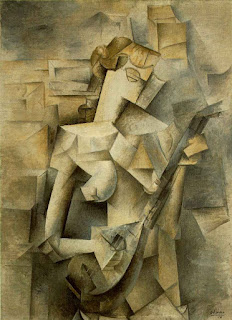 This was written in 1910. So Picasso had just entered his cubism period and Einstein was just made a professor and had five year earlier set forth the basis for relativity, quantum mechanics, explained brownian motion while proving atomic theory, and explained the photoelectric effect which is how solar panels work.

Update: So I don't forget the posters.
Posted by Tatarize at 18:10 No comments: