Sometimes things are awesome. This is being added to my list of awesomethings.

I rarely thought I could be more of a Carrier fanboi but he's done some fantastic stuff.
Posted by Tatarize at 18:58 No comments:

Upon being told I am blind to Jesus...

There's no serious difference between Christianity and what we can agree are false other religions. Which is to say that Christianity has no evidence in its favor and considering things like blood sacrifice, and demigod adventures, the sins of ancestors, and fairy tales which are found in Christianity but should not be found in a true religion. Because they make no sense as a matter of reality, God no more needs a dying and rising savior son to be blood sacrificed to himself for propitiation for the sins of the ancestors than God needs a spaceship made of string cheese, but these are things we should expect of a religion that was invented in a mix of cultures obsessed with primitive blood sacrifice and that was hugely in love with the wacky adventures of the sons of gods.

We have no reason to suppose Christianity is any more true than any of the agreed upon false religions, and we have many reasons to suppose that it was simply invented by people between 1800-2000 years ago or so.
Posted by Tatarize at 16:24 No comments:

Labels: arguments, crap I wrote elsewhere but felt was so brilliant I had to repost it here, Jesus, Richard Carrier

Garden of Eden, and the need for Jesus.

There are very serious problem with the story of Christianity, namely it doesn't really make any sense. With regard to Eden, why the hell are you going to put your talking/tempting snake anywhere near your magical tree or your humans not suppose to eat your magical tree? Why not plant your magical trees significantly far from your humans, like on the other side of the planet, or get this, don't even keep magical trees around at all (it's not like you need knowledge or life as God). It's not like I keep my lizard poison and my lizards in the same terrarium.

And to think, to fix this mistake God needed magical blood but only his own blood had enough magic to do it so he gave himself a body and killed it. Why did God need a magical dying and rising savior child? Well, much like propitiation by blood it was the style at the time. It isn't as if the universe would *actually* exist like this, that'd be insanely stupid. But, this is *exactly* what we would expect to come out of that region if they made up a religion. If you combine Judaism of the time with Paganism you pretty much end up with Christianity. The Jews liked them some blood sacrifice and the most popular motif in Pagan myth was the son of God and his wacky adventures. Give yourself broad appeal by adapting these much beloved plot points and you have a successful religion. However if you think about it, God no more needs magical blood than a spaceship and no more needs a dying and rising savior God-Child than the oxygen carrying molecules of a few terrestrial critters on this one dinky planet.

None of this makes sense if Christianity is true, but we should almost expect it if Christianity is false. If Christianity didn't exist, it would almost inevitably end up with some other group making up exactly such a story, so much so that the origins of Christianity are almost certain. It would be weird if somebody didn't try to mix Jewish mysticism with Pagan demigods.
Posted by Tatarize at 04:46 No comments:

Girl With A Pearl Earring

There is something absolutely brilliant about this kind of commentary.
Posted by Tatarize at 21:43 No comments:

Basically I'll be doing some "Shorter" synopsis posts on creationist stuff I bother to read. I might as well have em. Today we have:

Next, Mathematicians will find no multipliable evidence for numbers.

Shorter Creationist: A decade ago scientists realized Molecular genomics was harder than they hoped, therefore their entire field is wrong and God exists.
Posted by Tatarize at 08:07 No comments:

Data moving will take like 10 hours.
Start the move.
Go to bed.
Wake up to find Windows has been waiting with baited breath for 9 and a half hours to know whether I want to move Thumbs.db too?

This stuff wouldn't be so silly but Windows made thumbs.db. It's a windows file. It consists of thumbnails of pictures in the directory that would not be there if they moved. *sigh*
Posted by Tatarize at 07:20 No comments:

That's a pretty good principle to have. I daresay there's a few places I could see it being hugely useful.

Posted by Tatarize at 03:10 No comments:

A Plothole Nailed to a Stick.

Sometimes when you're in the zone, in this case responding to somebody on Amazon who seems intent on offering TAG as some kind of knockdown to Naturalism. Because if one can equivocate the meaning of "exist", one can somehow create a large enough hole to shove a god into.


It seems rather strange to follow a religion grounded in the primitive notion of blood sacrifice in a society that understands the utter silliness of propitiation by blood. That the creator of the entire universe needed blood to fix the universe and sate his own anger and allow violations of his own rules so much that he donned a baby suit and sacrificed himself to himself, because only He in human form had enough magic in his blood to accomplish this task. And rather than ever look and address these rather terrible shortcomings which, are well marked in The Christian Delusion: Why Faith Fails, you attempt to squabble over your strawman versions of naturalist ontology, as if wrongly conflating physically exists with transcendentally exists or morally exists will suddenly make one forget you worship a plot hole nailed to a stick.

Labels: amazon, crap I wrote elsewhere but felt was so brilliant I had to repost it here, TAG, the christian delusion

The Bible in a Nutshell 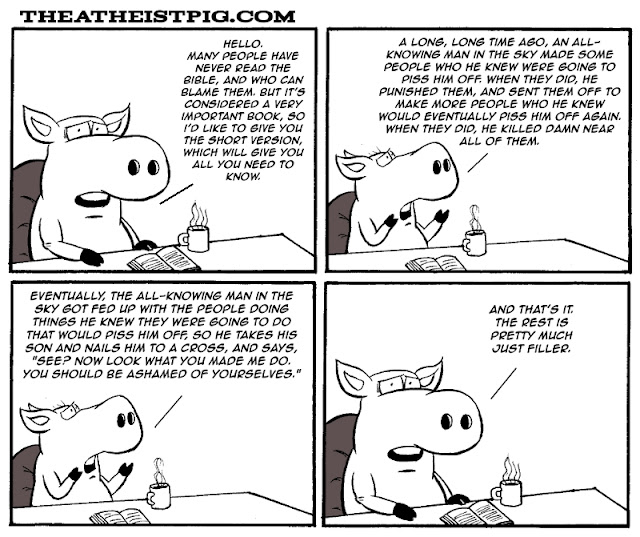