The Shroud of Turin, Redux

A while back I mistakenly subjected myself to to some painful watching of nonsense by the BBC about the Shroud of Turin, in order to properly purge it from my system and do something slightly productive with it I decided to make a quick post on this blog about it.

Well, I was searching something or other involving my name and I managed to turn up a very interesting post, titled When Atheists Act Like Fundamentalists on Shroud of Turin Blog. Wow. I feel so special! Also, apparently Freepers got a copy of the shroud post. You know somebody must have tore the hell out of your post if the Free Republic batted it around. *smirk*

Most of his "corrections" were based on nonsense that I already knew but long since discounted. Some Shroud people in order to "come to terms" with the radiocarbon dating, discount the dating by suggesting it was taken from the wrong place. I already knew that and found it utterly silly. The sections were taken from varying parts of the shroud and simply saying "those parts don't count because they are later repairs to the shrouds" doesn't suffice as evidence that it's older. Other bits were information which I took directly from the BBC piece like the date on the Sudarium of Oviedo.

This was all. It missed the entire point of my post. The entire implied argument had no links to draw the argument. It insisted that because the hood was 5th century or some drawings were from the 1100s that the shroud was from that century; not one lick of that was established.

There are drawings of some shroud said to be burial shroud of Jesus. Therefore this shroud here *MUST* be that shroud. -- That doesn't follow at all. Further because the Bible says there was a burial shroud doesn't imply for a second that the Shroud of Turin is that shroud.

My post was intended to be largely flippant and expose the underlying flaws in the argument. "We have X therefore Y equals X." was the very typical line of argument used in the program. We have "references to some shroud" therefore "Shroud of Turin" equals "that shroud". At every step that was the argument given!

In the end all the evidence is very consistent with a 14th century hoax. Even the pollen dating and other things "Shroud scientists" have come up with remain consistent with that date. The strongest evidence suggests that the Shroud of Turin is a priceless 14th century artifact. However, out of what appears to be sheer desperation people cling to it like it's evidence for anything divine. Even if the evidence suggested it was a first century burial cloth it wouldn't prove anything.

In many ways it reminds me of the archeologists who suppose "10th century BCE finds" each time they make any archeological find in Israel, or how everything from the 1st century is repeatedly tried to be tied into the Gospel story. "This is Jesus' cave... well, actually maybe not... maybe it's Lazarus' cave then!"

Do these people have any idea what kinds of evidence is required to actually meet the requirements to actually be evidence? There's some crazy guy who pretends to find a bunch of great Bible stuff like chariot wheels at the bottom of the Red Sea (not actually even a chariot wheel). Ignoring the fact that even if it were a chariot wheel, there's no end to reasonable explanations how a chariot wheel could end up there without invoking Exodus.

He disagreed with some of my "facts" that I simply lifted directly from the program itself and that's SOOOOO FUNDAMENTALIST!

"“I am utterly astounded at how many hoaxes people buy into lock stock and barrel.” — I agree. But it can cut both ways." -- Really, what hoax am I buying into? Pfft.

This tool makes a post about "When Atheists act like Fundamentalists" and mostly agrees with all the points I made, except he inserted some other arguments that I already knew and regard as complete crap too, but fail to fit the theme of why this program particularly sucked.


* In the initial version of the original post I did note that I used the wrong dates and rechecked the video. So my version reads "The Shroud of Turin carbon dates to the 1320s. The Shroud of Turin was first seen around the 1360s." whereas the linked version says 1360s and 1325 accordingly.
Posted by Tatarize at 02:29 5 comments:

Some animals are fake.

I've been going ahead and publicly doubting the existence of some animals in the past. I started out by disbelieving the Aye-Aye, just because it was ugly. Then I took to doubting that one fish with the light on it's head. Now I've got another one for the list...

It isn't so much that I doubt them as that they are freaky and what the hell kind of freaky crap is that. Robots, I call robots on that shiznet!
Posted by Tatarize at 23:58 No comments:

The Atheism Tapes was very well done, but they were done for this set of programs which are easily good in it's own right.

If we go back to the beginning we shall find that ignorance and fear created the gods; that fancy, enthusiasm, or deceit adorned or disfigured them; that weakness worships them; that credulity preserves them, and that custom, respect and tyranny support them in order to make the blindness of men serve its own interests. -- Baron d'Holbach, Système de la Nature

Saw this awesome quote from onegoodmove and figured I'd quote it for two reasons. First, he's right. Second, he's Baron d'Holbach for craps sakes... he's like the first modern atheist ever.
Posted by Tatarize at 21:52 2 comments:

If you... then the terrorists win.

If you respond to a million dollar plot doing a billion dollars of damage with a trillion dollar war and then run out of money and collapse... then the terrorists win.
Posted by Tatarize at 23:33 No comments:

This one time I relied on anecdotal evidence, and it totally lead me astray.
Posted by Tatarize at 23:23 No comments:

It wanted me to check back in a while. That son of a bitch. It finished before the information was even submitted by like .1 of a second. Damn computers.
Posted by Tatarize at 23:42 No comments:

Are you related to the Blahs?

I know all of the members of my branch of the family. I could draw the tree from my great great grandfather. However, I firmly understand and accept evolution and clearly am related to the the Blahs. But, not in the fashion they want to know about. -- Every time I say "no" to that question, I feel a little tinge like I should have a witty reply ready that doesn't violate common ancestry.

I am more related to them than to bananas, but my surname does not reflect a particularly close or known relationship.

Why does this poem seem so tortured? Is there something special about it, if so, what?
Posted by Tatarize at 00:21 3 comments:

Posted by Tatarize at 17:45 No comments:

I should be pessimistic but I'm not...

You'd think when the world economy jumps off a cliff that one should be exceedingly pessimistic. But, somehow I'm not. Which isn't to say that I'm deluded, I understand that we're completely screwed for a good long while and that it comes towards the tail end (probably already over the breaking point) of when we really needed a lot of extra money to funnel into projects aiming to save the world. The world economy is going to collapse and the fossil fuels in the air are going to cause further catastrophic changes over the long haul. The food shortages in some areas are going to deepen as the droughts get worse and large populations are going to be displaced or die off.

It seems like it should somehow make me keel over, assume a fetal position and cry, but it doesn't. Maybe it simply hasn't hit home yet. 'Scourge the shire' and perhaps I'll fully understand how screwed we are. It just doesn't seem to be within my powers and so out of my concern. My simple view of life is that it goes on, even if it doesn't.

Why the Japanese should be fine in this recession. 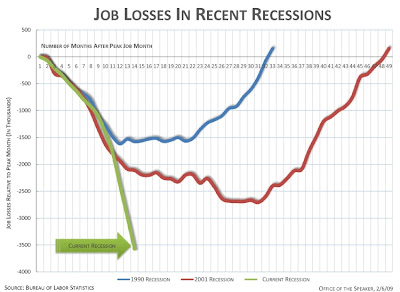 See, if you read from right to left like the Japanese do, then it looks like we're gaining jobs at a record pace.
Posted by Tatarize at 23:24 No comments:

Waiting in Line at Court...

So I had to go by the court today to take care of a ticket and see the judge. It's a pretty involved process that typically also involves hanging out in line. So there I was waiting at 10:00 for the 9:30 call to enter the courtroom and I overhear two people talking. The first is waxing poetic about an optimistic philosophy of life...

"When your car gets a flat tire on the way to a job interview you need to not cuss out your tire."

... Such an enlightened man, what could be his secret? The women he was talking to finally asked the relevant question...

"What month were you born... oh, you're a Virgo, that makes sense!"

... before going into a long story about how she was going to get her driver license back and then sue somebody.

And as I glanced at another women I overheard on the phone earlier leaving in a huff (she wants the house she bought while married with her husband to be all hers because she totally changed some names surrounding the deed without telling her husband and the Judge said 'maybe she should get a lawyer') I thought myself unworthy in the presence of these towering intellects.
Posted by Tatarize at 23:22 2 comments:

Tim Minchin: Some people have it worse than me.