The Origin of God, Douglas Adams 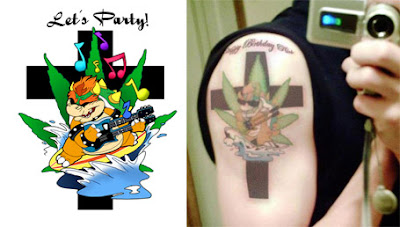 I've thought about getting a tat here and there and the best I can figure is that I should get Darwin's "I think". Just the words not the tree of life he sketched, on my foot. And/Or a pretty classic picture of Hugin and Munin (Odin's ravens) on my shoulders.

However, neither takes as much thought and work as the above tattoo. That's awesome.
Posted by Tatarize at 14:32 No comments:

It's like a horror novel where rather than some supernatural agent a person goes up in smoke by accidentally being given too much money. Given 10 million bucks (NZ) the guy vanishes without a trace. Somehow you got to admire the ability to transfer that amount of cash someplace else and vanish.
Posted by Tatarize at 13:16 No comments:

Some think it's a bit too fast but I'm of the opinion that it's absolutely been enough time. The idea that if you act too soon then you can't have liberty has always been a mistake. Gradualism has always been a profound mistake. I am reminded of William LLoyd Garrison's words in the first issue of the Liberator:

"On this subject, I do not wish to think, or to speak, or write, with moderation. No! no! Tell a man whose house is on fire to give a moderate alarm; tell him to moderately rescue his wife from the hands of the ravisher; tell the mother to gradually extricate her babe from the fire into which it has fallen; – but urge me not to use moderation in a cause like the present. I am in earnest – I will not equivocate – I will not excuse – I will not retreat a single inch – AND I WILL BE HEARD. The apathy of the people is enough to make every statue leap from its pedestal, and to hasten the resurrection of the dead."

Or those of Martin Luthor King,

This is no time to engage in the luxury of cooling off or to take the tranquilizing drug of gradualism. Now is the time to make real the promises of democracy.

Most of all I'm sick of having my state vote down gay marriage when we seemed so nicely liberal (Ohio has gay marriage and we don't!). It was the 'No On 8' people who sucked so bad that it lost. It could have been kept down if they had better planning and a better campaign. So, after than major screw-up, I don't care what they say. The gays are no longer in charge of the gay agenda as far as I'm concerned.

So I don't give a rip about their silly state by state campaign. I say we start suing everything we can until people have equal rights.
Posted by Tatarize at 23:57 3 comments:

Dawkins discussing the origins of life.

Worth a watch, nothing super special.
Posted by Tatarize at 15:44 No comments:

Primate Fossil being pitched as the second coming of Christ, hurting the cause.

The fossil is admittedly really cool. It certainly is up there with some other impressive fossils and it could shed some light on primate ancestry but in many other ways it's not as cool as tiktaalik or archeopteryx. It really does look like a monkey. It might shed some light on primate evolution and thus our evolution but then so did Tiktaalik, and I wasn't joking in the title. It's actually being hyped as the second coming of Christ. One of the dates listed in the hyperbolic advertisement for the program was 0AD. Despite the fact that there was no 0AD, it's a pretty clear reference to Jesus and putting this up there with the importance of the supposed date of the birth of a mythological character during the time when both the Gospel of Luke and the Gospel of Matthew rule out as a supportable birth year (after 4CE Herod the great isn't alive to murder the children, before 7AD there's no supposed Roman governor to order a census).

So when creationists chime back in and point out that it's one fossil that looked like a monkey and that's where all the damned evolutionists put their marbles in one last grasp to try and justify their "made from nothing" theory... they will be partially right. The hype is massively overblown.
Posted by Tatarize at 18:25 No comments:

Though, typically over estimated, it's still super awesome. There's a 47 million old primate preserved absolutely fantastically. It looks a bit like a lemur. But, it's cool that Google chimed in with a logo.
Posted by Tatarize at 16:02 No comments:

The Jill and Julia Show

Jill Sobule and Julia Sweeney, it has to be good...
Posted by Tatarize at 22:29 No comments: 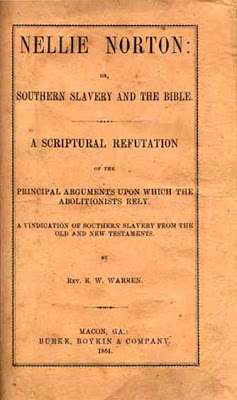 "Nellie's mind was not at rest. The Bible certainly did teach that slavery was a perpetual institution. Its chains were forged in heaven, by God himself, and so fastened, that no power could sunder them but His."

It is an often uncomfortable argument that the Bible condones slavery. Many apologetics are offered to this idea, and many of them were addressed at the time. Rev. E.B. Warren here is a prime example, he argues with perfect clarity and good proof text and solid arguments that slavery is approved by the Bible. Indeed, the North was in a theological bind with sub par and bad arguments to mount a Biblical defense of abolitionism.

This has since been flipped such that nobody finds any moral rationalization for slavery. Such has become of many such arguments: they aren't what they intend to be. This was written to convey the idea that the Slavery is moral because it is approved of by the Bible. Today, however, it succeeds in showing that the Bible is immoral.
Posted by Tatarize at 21:12 No comments:

Imagine two horses are due to run a race.

The first horse has won every race it has ever run. And it has run over a million of them. And each and every time it has won.

The second horse has never won. It has always raced against the first horse and every time it has failed to win, usually it has even failed to finish. It has done this over in the same million races.

Posted by Tatarize at 21:29 No comments: 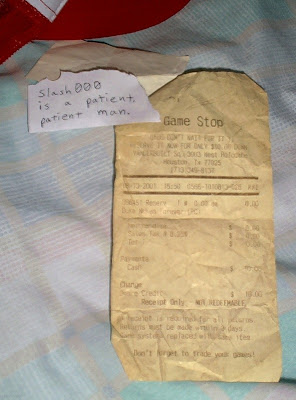 For those of you who haven't grown up in the Duke Nukem Forever age, it's a piece of Vapor Ware that's been "in development" "until it's done" for 12 years. I was 15 when they started. And it's finally died.

Well, that makes this the first time in my adult life I've had any hope that they will finish... since they died. Seriously, bankrupt companies sometimes let their projects out to the public. And though, sadly, Duke Nukem is still a marketable project which lowers the odds it wouldn't be too hard to put the game together as an actual free unpaid project put together by gamers. For example, Black Mesa is a rather massive project making the original half-life game in the Half-Life 2 engine. It isn't too far out of the realm of possibilities to put whatever story charts and sound effects they have into a good Duke Nukem game. There are good SDKs out there and using game engines such as HL2 is permitted for free mods of games (because you need the engine itself).

I'm just saying, it's a sad thing when the odds of finishing a game go up after the company dies.
Posted by Tatarize at 19:41 2 comments:

So for those of you who don't know, there's this nutty kid called VenomFangX on Youtube.

The given reason that's been floating around is that he got death threats from Muslims. This is a little odd for a number of reasons. He should revel in the deaththreats. If somebody tells you to stop fighting for Jesus or they are going to give you an express pass to Heaven, then clearly the plan for a true believer is to go run and hide? WTF. That doesn't make any sense.


Some others suggest that it's because he was scamming money. That was the first respectable thing the kid seemed to do. Start scamming cash off his rube followers. The venomfangxsite says that

"This site has been taken offline by the parents of VenomFangX, they don't support/share his views and apologize if he has offended anyone. This site will be offline for good in 3 days."

Others speculate that his parents got angry at the money scamming or because one of VenomFangX's followers killed himself and a girl.

In any event, it doesn't look at all like Muslim deaththreats did it, nor really should they have been able to.
Posted by Tatarize at 15:27 No comments:

That's one of my favorite lyrics ever. I'm sure it'll fade and no longer be true shortly.
Posted by Tatarize at 15:58 3 comments:

Sorry about shouting. It's really not that exciting, but I noted in comments of "Vermont Legalizes Gay Marriage" that though I didn't use full caps in "Iowa legalizes gay marriage" that I would use full caps next time. So it seems like a building trend rather than inconsistent headlines. Maine became the second state to simply pass a law to allow it rather than legalize it by way of the courts.

This is a pretty good trend. I doubt it will be even five more years before it's properly legalized.
Posted by Tatarize at 16:43 6 comments:

Now they protect it because they don't want cooties.
Posted by Tatarize at 22:19 No comments:

Posted by Tatarize at 14:48 No comments: