Oh, something I made achieved moderate popularity!

Introduced on this blog last February.

Sandwalk actually made a post about it.
Having actually borrowed it from another site!

And was added to a few other image sites.

-- And it was edited to remove the watermark. Somebody actually went to a minute amount of effort! 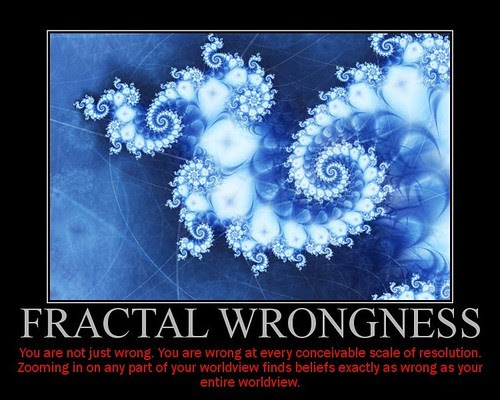 I actually own fractalwrongess.com after earlier this year the Non-Prophets talked about the concept of Fractal Wrongness by Keunwoo Lee. I fully understand that I just stole a picture of a fractal, plugged it into despair.com's diy demotivator maker and changed the general theme from one of describing the noun to a declarative statement with a little more brevity. -- But still. Something I made achieved moderate popularity... unlike this blog.
Posted by Tatarize at 19:40

First heard the term on a Non-Prophets show, and its stuck in my mind ever since. Good work mate, it works.

Love the Fractal Wrongness, its my Facebook profile pic now. Props, yo.